Picture gallery of this project

A group of local Hastings and St. Leonards-on-Sea residents came together to take part in a performance based on their memories and stories. This event was the culmination of a Creative Reminiscence project for people over the age of 60, run by Shaping Voices Arts Company in conjunction with the WRVS. The project has been funded by an Awards for All Lottery grant which has enabled members of Shaping Voices to work for several weeks with a group of enthusiastic people aged from 62 to 92.

Through a series of weekly creative group sessions participants’ memories were transformed into stories that are touching, highly visual and often extremely funny. The performance, given by members of the group and of Shaping Voices, included elements of singing, acting, dancing and poetry.

In a kaleidoscopic fairground
Mrs Mop & Esther plied their trades.
Mrs Mop remembers sulphurous vapours
filling the air, the hissing and the sharp smell
of fear, the slippery blackened stick slithering
out of my hands, the taste of gas on my tongue.

Esther remembers the tinkle of bells,
the aroma of black tobacco coating
my nostrils, the ice cold crystal beneath
my hands, the taste of unknown sorrows
yet to come.

After the birth of the seventh FitzGerald,
when the paternity payments outweighed his means,
Just Gerald left Surrey (in a hurry)
for a short holiday in Mexico.
He saw a card in a shop window
for a job as a bandit and decided to stay.

I’d always put a bit by,
so that when I retired
I bought a house in Streatham and
Filled it with vibrant young women.

How the stag got his antlers


 The stag envied the king his power and everything he could do as a person, so he went to see him and fell in love with his crown. He went away and tied thorny branches to his head, but was constantly saddened because they fell off. So he went to see Pan, who lived in the forest, and told him. Pan said, “Wanting is not enough – you must show yourself brave enough to bear your crown.”

One night at the beginning of autumn there was a huge storm and many animals were injured by falling branches and their homes ruined. The stag, who had taken off his crown, forgot himself in his urgent need to help. He moved branches and he carried small animals to high ground. He laboured all night.

In the spring, as the forest began to bloom and grow, first his wife and then all the animals noticed his good looks and bending down to drink he saw, reflected in the pool, small horns coming from his head. Each year they grew grander until in his great old age, as he increased in wisdom, he bore on his head the most splendid set of antlers, like the branches of an oak tree.

< Back to top of this page

::  first page of this project >
< Return to the Shaping Voices Homepage
::  Jump to next project – Peeling Apples >

Who are Shaping Voices?
Company History
Funders and Partners
Contact us

A group of Hastings and St. Leonards-on-Sea residents come together to take part in a performance based on their memories
and stories. 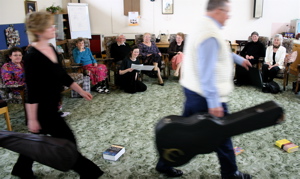 What is Creative Reminiscence?

Creative Reminiscence sessions provide an interesting, light-hearted and stimulating environment where those taking part can enjoy rediscovering and sharing their memories in a new and meaningful way. A series of creative group sessions lead to informal performances of original stories/monologues based on the personal reminiscences of people over the age of 60